Frogged is themed around the classic 80s arcade game Frogger. This tribute will usher in waves of nostalgia, for those who played Frogger. It is still a novel concept for those who did not. A frog navigated across a busy road and a fast flowing river in the iconic game.

Rival Gaming developed Frogged. They are one of the larger companies, and have over a decade of experience in the online slot industry. Rival Gaming, by their own count, has produced 205 casino games.

The most memorable of these titles was their, i-Slots range, an innovative line of games with a progressing plot that the player worked through, while spinning the reels. It was an ambitious concept and the industry took notice. Rival Gaming are an innovative developer and make a great game. 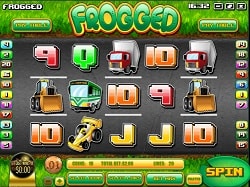 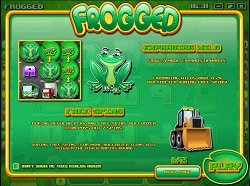 Frogged’s design is based around Frogger, in more ways than one. Behind the reels is a road, and the picture symbols are the cars and trucks, which the frog has to avoid. The low value symbols have an 8 bit design. This game is designed well. Rival Gaming has done a lot with the theme, which was probably the most important aspect of this design, to nail.

It does not have the best graphics, but it is a retro slot, and the 1980s cannot be captured in pristine graphics. It is a 5×3 slot. The horizontal lines on the road divide the reels. There is a generic panel under the reels, which neatly house all of the game’s controls. A grassy background borders the reels, it is a little plain, but the player’s attention is directed towards the reels, so this was a good design choice.

There are twenty payline in Frogger, which just means that there are twenty different combinations, of symbols, the player can land on the reels, to make a win. The wins must be made in accordance with the paylines, which can be viewed in the Paytable.

It is a left to right slot, meaning that the first symbol in a winning line must be in the furthermost reel to the left, to start the line. It is an easy slot to get a handle off, with generic gameplay. The player spins the reels, with the spin button found in the panel. The bet is adjusted before the spin, to wager on that spins. Wins are paid at the value of the win, and the bet.

The Frog Symbol acts as an expanding wild. It hops towards the top of the reels, and leaves a trial of lily pads, as it goes. These lily pads are wild and substitute any symbol to make a win. The frog only expands onto the rows above where it landed, which builds on the Frogger theme.

There is also free spins game, in which the player is gives 7 free spins. It is triggered by landing 3 or more scatters, on the reels. The scatter symbol looks like a bulldozer. The gameplay in the free spins game is the same as it is in the base game. The only difference is that is a player lands another 3 scatters they trigger another bonus feature, the River Rapid Bonus.

The games appearance changes to mimic the river, which the frog had to cross in the game Frogger. The symbols are worth more, and there are bigger wins. The frog still act as an expanding wild, but he has a two times multiplier. There is the fly symbol. A sticky wild with a two times multiplier that will hang around for the next spin.

The biggest wins are made in the River Rapid bonus. A five of a kind with the Alligator Symbol is worth 1000x the bet. The highest a player can bet is $50 so considering 1000x stake and the sticky wild 2x multiplier, that is already $100,000 in this game.

This is a novel little game. It pays homage to the arcade games of old, with a great representation of the frog’s journey home. They have done well with the theme and made a game, with great gameplay and winnings. Players will enjoy this new title from Rival Gaming. 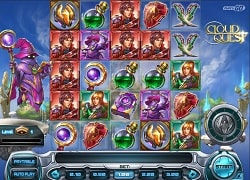