All roads lead to Paris this week as the start of the European Football Championship is on its way. The city is slowly filling up with football fans from all over the world, which came to cheer for their national team.

To be honest we expected a higher level of animations and visual details for a new video slot game like this, but except for the name and the sound of fans cheering, nothing more will attract you to try the game.

Euro Golden Cup is the latest football project by Genesis Gaming. With this game Genesis joined the long list of providers with video slots promoting football and we hope the number of new games by Genesis will reach higher numbers in the future. 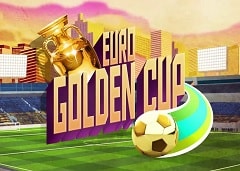 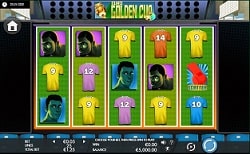 Euro Golden Cup uses a common 25 pay line design, seen on many other video slot games around the industry. The bets placed can range from $0.25 up to a high $250 per spin depending on the players bankroll. The auto play button is a great feature to use for long sessions, with several extra options to control the game play.

If you take a look at the game rules and see all the features that can be triggered in Euro Golden Cup you will see that it can provide an interesting and dynamic game play. As you spin the reels you will notice the many empty spaces above the reels.

As you play with each flag symbol that lands on reels 1 and 5 at the same time a corresponding trophy is awarded and set in place above the reels. You need to collect a total number of 30 trophies in order to unlock all bonus features in the game.

There are 3 features in total and 3 corresponding levels starting from 0-15 trophies collected, 15-29 trophies collected and the last is unlocked with all full 30 trophies in place. Each level has a bonus feature which is triggered by landing the standard 3 or more scatters on the screen.

In the first level only the Play Maker feature is available with 10 free spins and stacked sliding wild symbols. This means that each wild that lands on any position on a reel, will slide up or down to cover the full corresponding reel.

In the second level the Play Maker feature is enhanced with 12 free spins and another feature, Striker is unlocked. The new feature gives the player 10 free spins and in each spin a random number of Striker Target symbols can land on the reels transforming to any of the game symbols.

The last level unlocks the Penalty Shoot out, increases the Play Maker free spin to 15 and turns all Striker Target symbols wild. As the name suggests the penalty shoot out is a different bonus game with 5 chances to score winning goals and leave the penalty area victorious.

Each shot on the goal awards a credit prize, each scored goal awards a random win up to a maximum of x5 total bet and a victory multiplies all feature wins x 5. Even if the score is tied a decent x2 multiplier is awarded, while defeat doesn’t award any extra multiplier number.

We can’t really say too much about the maximum payout possible in Euro Golden Cup, simply because of the fact we couldn’t find such an info anywhere in the game rules.

What we did manage to see was the very small payouts awarded for the maximum 5 of a kind wins, leading us to think that Euro Golden Cup doesn’t have the potential for big payouts.

As much as we love football and video slots with that theme, Euro Golden Cup is just another of the many disappointments when it comes to games with a football theme.

The pay table is very weak with small wins in base play. The features can take a long time to unlock and trigger, with the biggest rewards only possible on the last unlocked level. Even so Euro Golden Cup doesn’t seem worth the money invested to go after some big win and is better to be played to have fun or wager some bonus amount.