If you love fantasy, and you’re a fan of dragons and magic, then Dungeons and Diamonds should be right up your alley. I wouldn’t expect any true D&D fan to see in this slot machine a great option though, since there are no mechanics that would give them that experience. It loads up with a dragon sleeping on his huge golden treasures, while on the reels it’s mostly a mix between card suits turned into jewelry, and the four main characters and top symbols that land stacked (Ranger, Warrior, Sorceress, Wizard).

This is going to be a joint launch, from Microgaming and PearFiction. The two developers created a number of other slots together, and more are likely to come out of this partnership. Check them both out, if you like what you’re seeing in Dungeons and Diamonds. 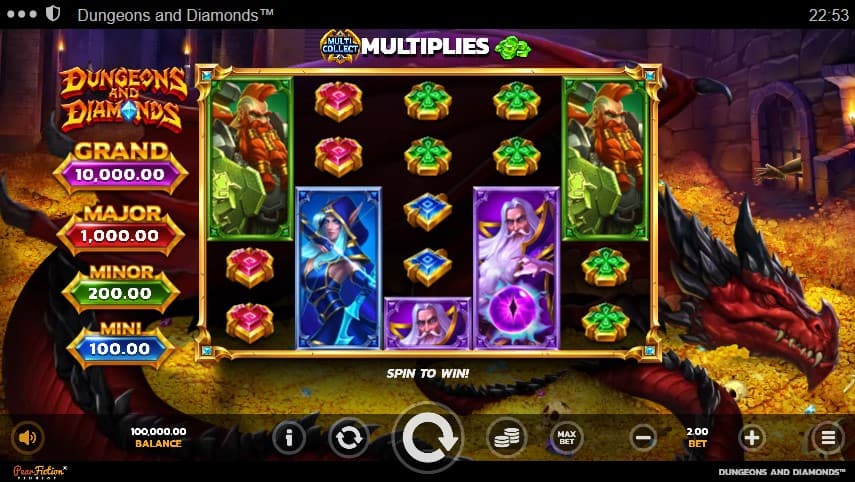 The game’s setup delivers 40 active lines, which is fairly generous typically, but here it’s done on 5×5 reels (there was room for so much more). Winning requires having 3 to 5 matching symbols on one of those lines, going left to right.

A special Collect mechanic is in use, and it involves three possible types of mechanics. It all starts with the Jackpot symbols, which land on the first four reels. You then need one of the three Collect symbols on the fifth reel, to trigger a Jackpot bonus game. The possible symbols include the Collect, Respin Collect, or the Multiplier Collect.

The feature that comes out of it is called Wicked Wizard’s Jackpot, and it will allow you to make picks and reveal one of the four fixed jackpot (Grand is worth 5,000x the stake).

It’s also possible to get a pile of green gems in one of the symbols from reels 1-4, and they’re worth up to 25x the stake. They can be combined with one of the Collect icons, to deliver these features:

There are also 8 free spins that a player may trigger, provided that 3 of the feature’s own scatters land at the same time. There are more Collect symbols, Jackpots, and gems added to the reels, so the potential to win is better.

Finally, a very simple Wild symbol is included, and it may be used to substitute for all symbols, the exceptions being the scatters, Jackpots, gems, and Collect symbols (anything that contributes to a feature).

Dungeons and Diamonds is considered a highly volatile release, so a slot machine where there is plenty of risk for most players. This also means that some of them will be able to win more, even up to 5,626x the round’s wager.

Dungeons and Diamonds might not have any direct D&D connection, but at least they’ve implemented a decent mix of special features, along with high quality graphics.