Castles, knights and dragons are the backbone of nearly every fantasy story. They’re tropes, certainly, but they’re tropes because they work, and people love them. That’s not to say you can’t make a fantasy world without them – Game of Thrones became quite popular even before it hinted at dragons, magic or other fantasy tropes that you see everywhere else.

But when it comes to creating an interesting theme for a video slot, you can’t go wrong with dragons and knights, which is exactly what this Merkur release is all about. The title has only one special feature – when symbols land in a specific position, they fill up meters on each side of the reels. One meter contains free spins, and the other multipliers – with the bonus triggering if one of the meters is filled.

Symbols include playing card icons such as 10, J, Q, K and A with spiky, but colourful icons, as well as flails, war-horns, a lit brazier, a throne, and a large castle. Special symbols include a knight and a dragon, which are Wild and appear in reels one and five, respectively. There is also a yellow shard with a dragon head symbol on top of it, which is a Bonus icon.

Merkur Gaming is a German slot developer with over 150 different titles released, and a large portion of those having seen an online release. While the company isn’t quite on the level of the larger slot developers when it comes to visuals, design or graphics, the gameplay in their titles is varied and fresh.

We’ve never come across a cloned title from Merkur. The company itself is part of the German Gauselmann Group, which is a large gambling conglomerate dating back as far as 1957. The group as a whole employs over 8000 people, and its founder, Paul Gauselmann is pretty much a rock star in the German gambling industry. 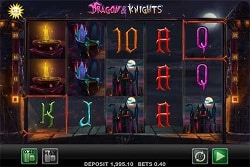 You play Dragon and Knights on a 5×3 playing field with 20 fixed paylines, which means gamblers cannot turn some or all paylines off to decrease their minimum bet. Instead, they can only adjust it by changing their total bet. The user interface for the desktop version looks good, but having large, square buttons admittedly looks a bit retro now that everyone’s shifted into circles and rectangles. The layout is also quite nice, with all the important buttons and information at the bottom, and stuff like the paytable on the upper right.

Gamblers can bet between $0.20 up to $40 per spin. This is a great bet spread that should please just about every type of player, except hardcore high rollers, who may want to bet even more. There’s also an Autoplay option, but it only allows you to select the number of auto spins, with no win or loss limits, or single win thresholds.

The background image is that of a castle in the night-time. You see the moon shining through the cloudy sky, a pair of towers rising from the castle wall on which the reels are standing on, and you can barely make out the spanning terrain through the transparent reels. Most symbols have an animation that plays when they’re part of a winning combination, which really makes the title look nice.

There is only one special feature, which is activated when one of the two meters on each side of the reels fills up. Each time a Wild symbol appears on the bottom left position or the upper right position, the free game or multiplier meters go up by one position.

Depending on which one fills up first, gamblers will either have the maximum number of free spins – twenty total, or the largest multiplier available, which is 5x. This creates for some solid wins later down the line under the right conditions.

The largest jackpot gamblers can win in Dragon and Knight is worth 2000x, which is a pretty solid jackpot, we have to admit. We weren’t able to find any official information on the volatility of this Merkur release. The RTP for this title is 96.05%, which is above average for video slots.

While not as well-known as other developers, Merkur continues to create fun and interesting games. For this particular slot, the graphics were fantastic, the gameplay was slow at times, but quite fun, and the 2000x jackpot certainly made it all worthwhile. Give it a try if you haven’t already, you won’t be disappointed.