Greek deities and legendary creatures are among the most popular main characters that you will find in any slot machine, and NetEnt gives us something similar in Divine Fortune Megaways. They went with a design that focuses on legendary beasts and creatures, not on the usual gods that most will be about.

Those symbols might include Royals initially (including the Greek letter Alpha instead of the A, and starting from the 10), but the top symbols give us images of the Gryphon, Minotaur, Lion and Medusa. Pegasus is the one acting as wild, while a Thunderbolt is a scatter which is used to trigger free spins.

NetEnt created Divine Fortune a while back, and now we’re getting a Megaways version for it, so there is one more opportunity for us to check out this game. You might still want to go after the original game though, as it had a progressive jackpot which made it a decent choice, and the Megaways title doesn’t include it. 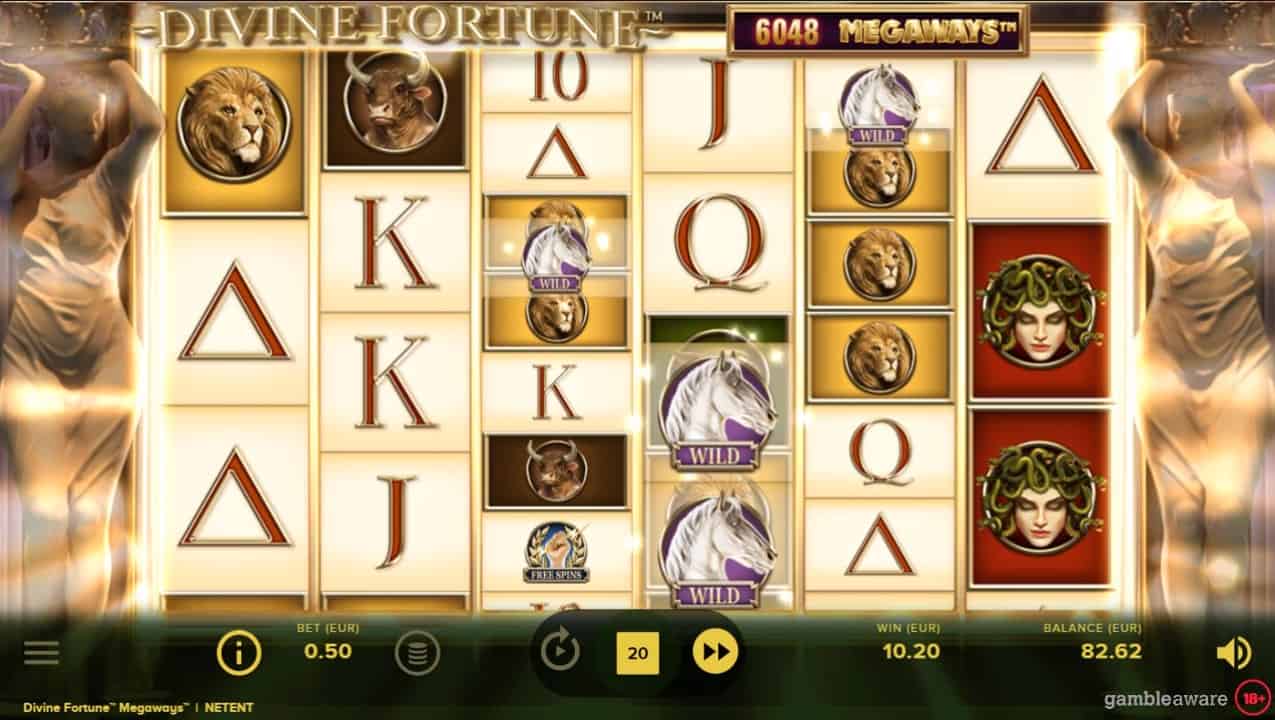 You don’t need much, to start playing Divine Fortune Megaways. As with most slots which deliver Megaways, the wager covers every potential win that you can get. As such, you just select the amount which works for your bets, between $0.10 and $100.

The setup of Divine Fortune Megaways is standard by now, at least for most games using this engine. It has 6 reels, where you will find 2 to 7 symbols selected at random for each one. You might have 12 symbols on the reels one spin, and 42 the next one, and that explains how you can get up to 117,649 ways to win (Megaways). You get paid when 3+ symbols of the same type, land left to right on 3+ consecutive reels.

Pegasus Wilds are added to the game, and they are used as replacements for other symbols, but that’s only part of it. These are also considered Falling Wilds, which act in that manner over several re-spins, until they leave the game area. They fall down by one position each round, and as they do so, the other positions re-spin. The re-spins stop only when there are no more Falling Wilds visible. If new ones land along the way, then the re-spins keep going.

Wild on Wild is a possible event, which requires that a Pegasus Wild lands on a position where a Falling Wild has dropped to during that spin. With two Wilds on top of each other, an expansion occurs, and the entire reel turns into a wild. As this is a Megaways game, this can mean that you’re getting up to 7 Falling Wilds, with just as many re-spins to go through after that.

You can get one scatter symbol with the Thunderbolt on each reel, and at least 4 are needed before you trigger free spins. 10, 15 or 20 rounds are available, for 4 to 6 scatters. These are guaranteed to turn wilds into wild reels.

There are three additional bonus symbols, medals made out of gold, silver or bronze, which you collect during free spins. 5 of the same type will get you a prize, worth up to 500x the stake.

Up to 5x the stake can be paid on each line/way to win that the game uses. A 25,000x jackpot is possible, but in a game with high volatility, so the odds are low enough that most can’t even dream of hitting that.

Divine Fortune Megaways is an improvement on the original in some ways, though the fans of the first game were likely interested in its progressive jackpot, which is missing in the sequel.