The nostalgia factor can be strong for some, and a slot machine which borrows from the disco scene of the late decades of the 20th century can still work well. Play n GO designed this one with almost a futuristic vibe to it, as even though we find plenty of neon-style graphics in there, it doesn’t look retro. That’s for the background though, as the game area ends up being filled with classic symbols.

Those symbols starts us off with the Disco Ball Wild, the Bonus Wheel scatter, along with Diamonds, three variants for the Lucky 7s, three types of Bar symbols, lemons and the cherries.

Dozens of new slot machines are being released by Play n GO each year, and it looks like they have a brand new title launched pretty much on a weekly basis. They have over 240 slot machines in their collection, and quite a few great ones, though some are similar to past titles. At that kind of volume, you can’t offer a brand new game engine in every single title you put out. 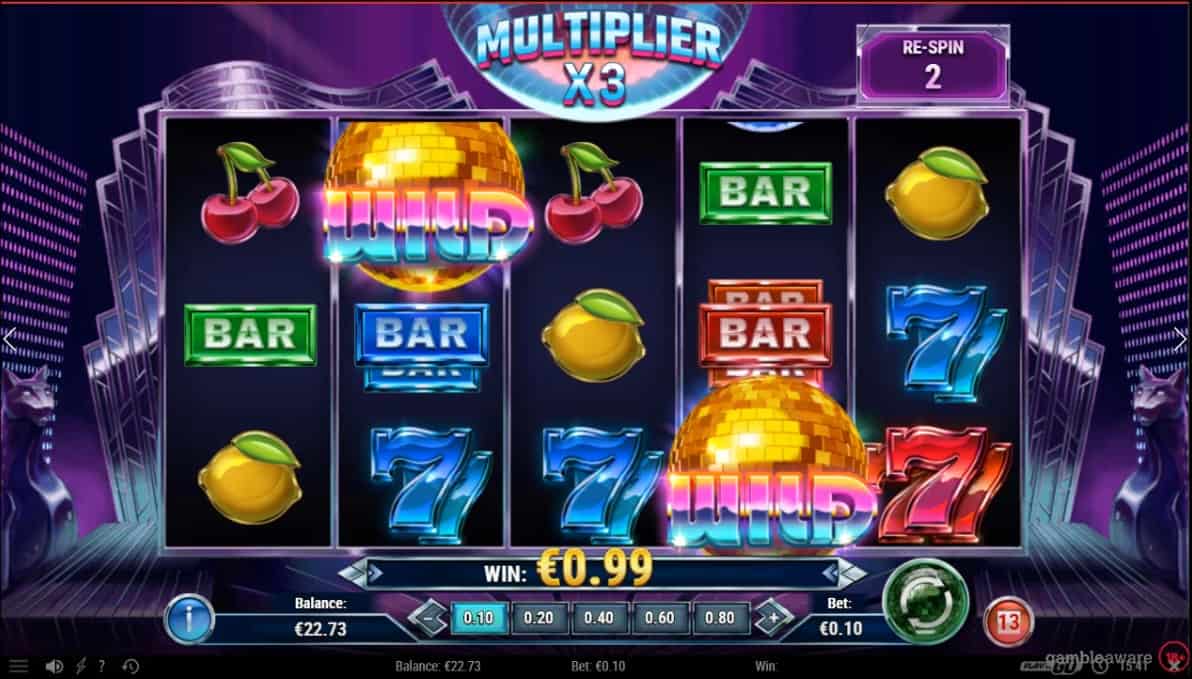 The exact wager is selected from the bottom section, where you will find a range of options going from $0.10 to $100.

The 5 reels available in Disco Diamonds are going to provide you with 243 ways to win, or potential combinations. As long as you get 3 or more symbols of the same type, to land left to right on consecutive columns, you will get a combo formed.

The blue Disco Ball symbols will serve as your wilds. Used as substitutes usually, at times they may show up enough times on the right reels, to deliver wins of their own. When that happens, a combo of five wilds will pay 50x the stake.

Gold versions of the Disco Ball Wilds are also used, but these have an additional role, that of respin triggers. The Golden Wilds are locked in their current positions, following which the multiplier gets a boost to 2x, and then a respin follows. If there are new Golden Wilds on the reels, then the respins continue and the multiplier goes up by 1x again.

Should the scattered Bonus Wheel symbols land 3+ times, the game will take you to that feature. A spin on the Wheel will give you free spins (5 to 20) or a cash prize (7x to 50x the stake). There is no way to retrigger the free spins, if you get them from the Wheel.

Get the free spins going, and you will find that the wild symbols are all going to turn into golden versions. Respins are a lot more common in this mode, plus their multiplier keeps going up, even between different respin triggers.

10,000x the stake is a good top prize to be looking forward to. It’s higher than in the typical Play n GO release even, and that’s for a developer that pays up to 5,000x in most of their new slots. The game’s High volatility is in line with the kind of rewards which are possible for its players.

RTP can be fine, at 96.29%, but that’s only if the casino is fair and uses that particular setting. Play n GO allows them to select other values for the RTP, and some will go with one that’s below 96%, which is not ideal.

Disco Diamonds might not look like a unique game, but I think you will appreciate the features and its potential, they do enough to make it a more modern option than it looks like initially.