With slot machines, the theme is not always the most unique thing about them. It’s hard to differentiate when there are thousands of other games released already, each one with another story to tell. Like Chronicles of Olympus X Up, many of them end up with variations on common stories, and in this case we’re seeing a design inspired by Olympus, the place where the gods of Ancient Greece supposedly lived.

Chronicles of Olympus X Up has a modern design, with appropriately styled Royals in the bottom-paying positions, while in the premium ones you can see images of gods (Zeus, Hades, Poseidon, Hera, and Aphrodite). Special mention should go to the X Up scatter and the Wild.

You might see different names associated with this game, and the reason for that is that it was developed by Alchemy Gaming, but it’s an exclusive for Microgaming, so its operators are the only ones that will have it. If you enjoy it, I’d recommend Africa X Up as well, a similar game that shares some of its mechanics with Chronicles of Olympus X Up. 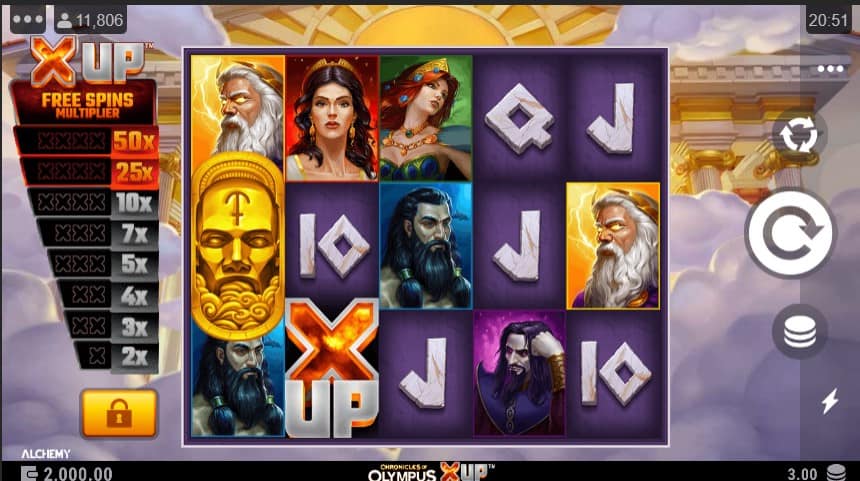 All you need to start playing, is to select a wager for the next round. $0.30 is the smallest amount that you can use, while $21 is the highest.

Chronicles of Olympus X Up relies on a system with 5×3 reels, which covers all potential combinations through its 243 ways to win. All you need, is for 3+ symbols to match on adjacent reels, going left to right, and you get paid.

A Golden Wild will be one of the major symbols that the game relies on. It’s an expanding wild, which makes it all the more interesting. In a game with ways to win, this allows it to be part of all winning combinations that are formed. It’s not a guarantee, but it can be useful. Ideally, you’d want wilds on all reels, forming their own combinations on all lines. As substitutes, they’re working with regular symbols only.

The other big symbol is the X Up logo, a scatter. If only 2 land, then you get a token, which gets collected in a special meter. It will boost the multiplier for the upcoming free spins, and it could reach a maximum of 50x.

Whatever multiplier will be reached when you get 3 scatters on the reels, that’s the boost that will be applied to wins during the free spins. 8 free spins are triggered initially, with 2 extra rounds added for sets of 2 scatters landing after that. You can still boost the multiplier in this mode, if you get new tokens.

As the free spins start, you get the option to pay, and activate the Upsizer, which boosts the multiplier.

The game’s capable of great things, as its top jackpot will prove. Chronicles of Olympus X Up can pay an impressive 50,000x the stake, which is excellent, and possible mostly because of those huge multipliers that you can collect before the free spins even get a chance to start.

Highly volatile, the game is one that I’d recommend mostly to experienced players. The RTP can be fine, but you need to look for casinos that use the highest setting, of 96.33%.

Chronicles of Olympus X Up is not completely unique, we’ve seen its features in other games before, but that doesn’t make its 50x multipliers any less interesting. I’d recommend it, though casual players are not likely to enjoy its volatility.