Booongo’s Christmas Charm slot is a nice and cheery video slot. We’ll give you three guesses as to what the theme of this slot is, but you are only going to need one. Christmas Charm is played over 5 reels and 20 paylines, and make no mistake about it; this is a very simplistic Christmas themed slot.

Even so, it is cute, it pays homage to a traditional Christmas, and it comes with a handy multiplier bar to boost your wins.

Booongo are still finding their footing in the online casino world, but if they keep developing slots along the same line as Christmas Charm, we’re sure that many players are going to recognise their work and remember their name in years to come.

As for the slot, itself; yes, Christmas Charm may be basic and elementary, but that doesn’t necessarily make it a bad slot, as you will see. 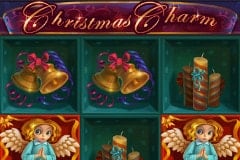 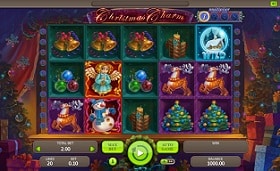 Booongo haven’t exactly decked the halls when it comes to the wagering menu bar in this slot. It is basic like most everything else in this game, but it does allow you to alter your bets with ease.

All 20 lines are fixed, but players can opt to wager anything from a floor of $0.20 per spin, up to a ceiling of $100 per spin. That’s a simple wagering range, making the slot ideal for players operating on all sorts of budgets, with all sorts of experience.

Wild symbols: Wild symbols do make an appearance in the Christmas Charm slot. They can be found as snow globe symbols, and when they appear they can substitute for all other icons in the game, except for scatters. Wilds can only appear on the second, third, fourth, and fifth reels of the game.

Scatter symbols: Scatters take the shape of Santa Claus. When these symbols appear 3, 4 or 5 times in any position on the reels, players will be able to pocket 10, 15, or 20 free spins in total. Scattered wins are not paid out for landing these symbols in the slots.

Symbol Crush: Whether you called it rolling reels, collapsing reels, or as Christmas Charm does – Symbol Crush – it all amounts to the same thing.

Every time the player lands a win, new symbols will pop down to replace those which featured in the winning combination. The more wins a player has in succession, the higher the multiplier bar above the reels will rise. It is possible to bag multipliers worth up to 8x the normal rate of pay with this feature.

Free spins bonus: As we’ve said, there is a free spin feature in this slot. Aside from winning between 10 and 20 free spins, players can also take delight in the fact that this slot can offer larger multipliers with the Symbol Crush feature.

In fact, wins can be worth as much as 16x the normal rate of pay with the free spins bonus and Symbol Crush features.

The most you can hope to win in this slot is 600 coins. To bag that prize, players are going to need to line up 5 of the angel icons on the reels.

Doing so with just 4 symbols can only see you pocket 150 coins, whilst landing 5 snowmen can see you win a respectable, though smaller 300-coin cash prize.

Christmas Charm does exactly what it says on the tin. The slot is full of Christmas Charm, it has a lot of excitement and entertainment to offer, and it doesn’t cost you a packet to play. Most players will be more than content with what they find in this slot.

It may only prove popular at that special time of the year, but Booongo have ensured that Christmas Charm will be available to play throughout the year.