Playtech are launching a new series of slots this autumn, and they are set to be amongst the very best superhero themed slots going.

Sure, the famous online casino software provider is set to lose its Marvel license (no thanks to Disney), but they are set nick the DC/Warner Bros license from Microgaming, giving them a whole new franchise to play with.

The first of these new games will be the Batman and Catwoman: Cash Slot, which is set to launch in the immediate future. We’ve already had a look at this 60s television series themed slot, and it certainly looks like it is going to rock.

Playtech has suffered a bit of bad luck. The nasty Disney company doesn’t want “their” Marvel franchises to be associated with gambling, and so there goes all of those wonderful Marvel Mystery Progressive Jackpot Network slots that we have come to know and love.

Fortunately, there is something being done to rectify that. Playtech has acquired the DC/Warner Bros license, and so they are effectively replacing their Marvel themed superhero slots with DC ones.

The new slots will even contain the typical progressive jackpot setup of the old Marvel games, and Batman and Catwoman: Cash Slot is set to be amongst the first to appear. 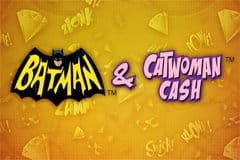 The new slot machine will be very familiar for any player who has tried their hand at Playtech’s Marvel themed slots before. The new game is relatively similar in terms of setup, paylines, wagers and features.

The simple menu bar at the bottom of the screen will allow players to alter the value of their coins (paylines are fixed at 25 in total), giving this slot a wagering range which extends from $0.25 per spin, up to $500 per spin in total.

Wild symbols: Just like any other Playtech developed video slot, this game can offer you wild symbols. In this slot, they appear as the Batman logo, and can substitute for all other symbols barring scatters. Wilds are also decent paying symbols, given that they can boost your wins by up to 100x the normal rate of pay.

Bonus symbols: Other nifty features are also available in this slot, including a Cat Burglar bonus, or free spins. In order to trigger those, you need to pink scatter icons on the first and third reels, or the first, third, and fifth reels, respectively.

Cat Burglar Bonus: If you triggered the Cat Burglar bonus, then you will get to pocket a cash prize, or a multiplier. The multiplier cannot be used directly, but it can be used later on in the free spins bonus, should you trigger that.

It is important that players understand that there are four progressive jackpots in this slot, and that they are all won entirely at random. This won’t be anything new to you if you have played the previous Marvel super hero themed slots from Playtech.

If you haven’t, though, this is how it works. Players can be taken randomly to a second screen, where they can click on various hexagonal icons.

This is quite an exciting and intelligent little video slot. It contains all of the features we loved about the original Marvel slots, although with the arguably cooler Batman theme.

This is 60s Batman, and 60s Catwoman, so doesn’t expect Christian Bale to turn up at any point in the game. The way that this game has been designed makes it original, and seriously good fun. We’re hoping for more from Playtech in this series.