We’ve seen several basketball themed games from Microgaming already, and the one we’re checking out today is the third in a series that the company started many years ago. They’ve kept many of the graphics used in the previous slots, which can be an advantage or a disadvantage, depending on what you’re expecting. Those that dedicated a lot of hours to the series, might want something new.

Among its symbols, the game has a couple of gold and silver coins, dedicated to basketball, which are used as scatters. A Wild Coin is also in play in one of the main features, while a Basketball is the one to get the free spins going, and a Wild Game Logo will be another substitute. Four different player icons are the ones that deliver the bigger wins, while images of medals, basketball shoes, water bottles, notebooks and whistles take care of the low paying positions.

What you’re looking at, is a game from a popular Microgaming series of slots. The developer was actually Pulse 8 Studios for this release, while the previous two were designed by Microgaming. Several of their series have been designed by independent studios lately, and this type of partnership helped them launch a lot more titles in recent years. 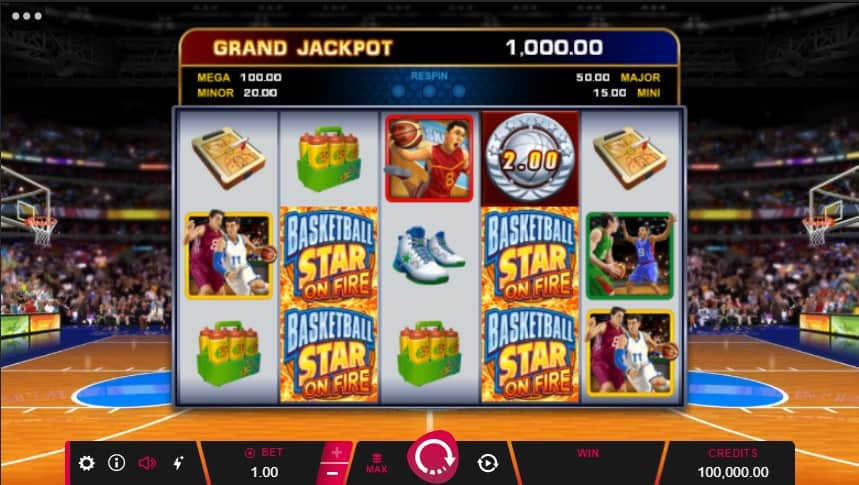 $0.25 is enough to activate all 25 lines of Basketball Star On Fire. It’s not going to let you go lower than that, since all lines need to be active. You can go higher though, even up to $100 for a single spin.

25 active paylines, and 5×3 reels to spin, will give you all the action you could want. With an all-themed collection of symbols, you try and form combinations of 3+ symbols on those lines.

Base game spins will have some help from the wild symbols, the ones showing the game’s own logo. As substitutes, they’re often useful if combined with regular symbols. Get up to 5 of these wilds on a line, and aligned properly, and their combinations can bring you 10x the stake.

With the Basketball Scatter present on enough reels (3 to 5), the game gets you access to 10-25 free spins. Once this feature starts, you will find that the 5th reel is filled with Wild Coins.

Wild Coins are present during free games or once the Hyperhold Respins trigger, and they are substitutes only for the Coin scatters. Having them on the reels during free spins, will add to the chances of triggering Hyperhold.

Hyperhold Respins require certain Coin scatters appearing in sufficient numbers (6+). It’s going to start with 3 respins, and with the initial Coins sticky. You try to get more, and the respins reset whenever that happens. Eventually, you run out of respins, or you fill the reels and you get the Mega Jackpot directly. Each coin will have a prize to pay, so you get rewards even if you can’t trigger one of the fixed jackpots.

Overall, Basketball Star On Fire can bring you a total jackpot of 2,500x the stake, from a single round. That might happen with regular wins, through Hyperhold Respins and their Mega Jackpot, or a combination of both.

High volatility will characterize its gameplay, but the expected 96.12% RTP looks good enough.

Basketball Star On Fire looks pretty good, as a sequel in a series which proved quite popular over the years. It doesn’t do anything special there, but it will scratch an itch for those that were fans of those games in the past.