PariPlay’s Bai She Zhuan video slot is an Oriental-themed game, which is quite obvious from the title. The slot references an old Chinese tale originating from the period of the Ming Dynasty. Bai She Zhuan translates to ‘Legend of the White Snake’ which goes, in outline, like this: a young boy called Xu Xian discarded immortality pills into a lake without realising it.

A turtle that was nearby wanted to consume them, but a white snake that lives in the lake did it instead. Years later, the white snake became human, met Xu Xian, they fell in love and got married.

The turtle was jealous, and it used the magical arts of Daoist to transform itself into a Buddhist monk and went to seek revenge against the white snake, which went by the name of Bai Suzhen. The two characters engaged in an eternal battle as they find themselves locked in stone sculptures.

PariPlay started operating in 2010, employing a team of 40+ experts in the gaming business. PariPlay focuses on creating flawless slots that work across all devices, but their portfolio also contains scratch cards, some bingo and keno games and a handful of virtual table games.

The slots are usually packed with clear and appealing graphics, and all of them are equipped with the Autoplay feature. PariPlay games are tested and certified by Gaming Laboratories International and iTechLab.

They are fair and their return rate ranges from 94% to 96% which falls somewhere into the category of the industry average. Pariplay is often featured at online casinos as one of multiple gaming providers, as it lacks the range of games to outfit an entire casino platform by itself. 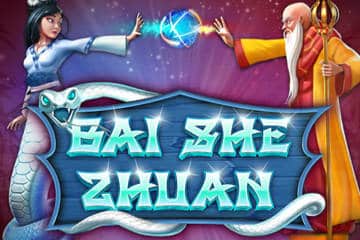 How to Play It

Bai She Zhuan online slot features 5 columns, 3 rows and 25 lines. Apart from the regular reels, the two pillars on the side with the statues of the human white snake and the Buddhist monk also participate in the game.

Setting the size of your total bet is easy – you just need to click on ‘-’ and ‘+’ buttons and then click on Spin. Autoplay is also available, previously optimised to adhere to UKGC regulatory requirements for loss limits and the maximum number of autoplay rounds. The smallest bet accepted on Bai She Zhuan is $0.25 and the highest is $12.5.

The two legendary characters are imprisoned in stone, trying to free themselves and destroy the opponent. It’s possible to crack the concrete and release the characters, but it is recommended that players only change the bet amount while the statues are intact. If the bet size gets altered when the statues have started to crack, they will go back to the original full-stone form.

Winning lines that are formed by blue symbols collect energy for the Bai Suzhen’s meter, and any wins made by the red symbols will count towards the monk’s meter. Once their meters are full, the characters above them will escape their concrete prisons and unlock either the Ba Suzhen’s Free Spins feature or the Fa Hai Bonus feature (Fa Hai is the name of the monk).

Ba Suzhen’s Free Spins award 5 freebies with the possibility of landing more free spins with the help of the snake. In the Fa Hai Bonus feature, the player picks from a selection of treasure chests and reveals a multiplier prize.

The RTP of the PariPlay Chinese-themed slot is relatively low at just 93.89%. For an online slot, a higher percentage would fit much better. The game’s jackpot is 5,000 coins, and the betting range is accommodating for low rollers.

Bai She Zhuan slot offers a piece of Ming Dynasty history and an engaging story, very well incorporated into the gameplay.

The return rate may not be as high as one would hope, but the bonuses are fun and rewarding and the way the game looks and sounds is beyond reproach. Developed in HTML5, Legend of the White Snake is optimised for mobile play.