Adventures of Doubloon Island will be a game with a pirate story, one of many to do this sort of thing right now. They’ve chosen a treasure island as its location, a typical hiding spot for treasure chests, typically buried somewhere, with the location marked on a map. As typical as that kind of imagery is, it still works just fine for slot machines, and this type of theme is incredibly popular among developers and players alike.

Well-enough designed, with a beautiful tropical island and a pirate ship in the background, the game keeps most of the attention on its reels and symbols. With treasure map-like colors for the background, the reels will host symbols that include four card suit icons initially, each one made out of different gemstones. Four high symbols follow, showing crossed swords, a parrot, and two male pirates. The female pirate is the substitute, while Treasure Chests and various coins are used as scatters.

Triple Edge Studios is behind this particular release, and it’s a small company that mostly creates exclusive slots for Microgaming these days. You will get a lot of these 3rd party-made games in Microgaming’s collection, which does add to the variety of their content. 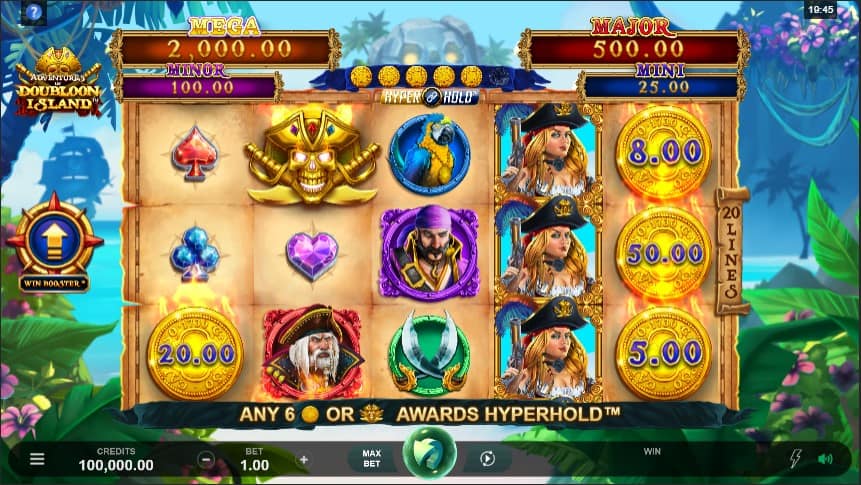 You’re going to have to pick a wager from the available list, which lists bets between $0.10 and $50.

Win Booster is the name of an option that you can activate, and which will add 50% to the bet, in exchange for a chance at a much bigger payout from the Mega Jackpot.

What you get in exchange, is 20 active lines on 5×3 reels. The way to get paid, is by forming winning combinations. This requires 3 to 5 matching symbols, which appear left to right on an active line.

I’d like to mention the game’s substitutes first, which you can get on all reels. These are stacked symbols, which show the Female Pirate. Landing on 1 to 3 positions, it acts as a substitute for any regular symbols. On its own, it pays as much as 50x the stake, by forming its own combinations.

Another one that’s big, is the Treasure Chest, acting as a scatter and able to land once on each of the five reels. Should 3, 4 or 5 Chests land at the same time, a prize is paid (up to 100x the stake), and then 10, 15 or 20 free spins trigger. The feature retriggers in the same way. I enjoyed the fact that all four card suit icons are removed, leaving only feature and high symbols.

Doubloon symbols, showing us gold coins which were in circulation centuries ago, will be the other scatters. These need to land 6 or more times, for the Hyperhold feature to trigger. From each symbol, there is a prize paid, at the end of the feature. You get 3 respins, during which you use the triggering Coins, and you try to get additional ones. Respins will reset back to 3, whenever new Coins land. This is the feature that could bring prizes of up to 2,000x the stake (Mega Jackpot), along with various smaller prizes. If the Win Booster option is on, you get 3,333x the stake from the biggest fixed jackpot.

It’s the Hyperhold feature that appears to be capable of paying most, with 2,000x the stake on the table for regular wagers, and 3,333x the stake for those using the Win Booster option (costs 50% more to bet). A medium volatility release, with a Return to Player of 96.01%, it’s fairly accessible.

Adventures of Doubloon Island doesn’t really have any unique features, but the pirate theme and the Hyperhold respins might get some players interested, particularly since volatility is not too high.