Zoom is the latest video slot game creation, which left the laboratories of Thunderkick software, out in the open world. You can see that it spent many years locked away in their chambers, as the game symbols it has were popular many years back.

Old timer players may enjoy Zooms appearance as they too share the some love and passion for these antiques, called symbols. There is a big collection of simple designs that remind of lemons, melons, grapes, cherries, sevens, bells, stars and a classic wild symbol.

We have heard tales that those stars used to bring tons of coins on the reels, but that hasn’t been seen for a very long time on a modern video slot game.

Even though Zoom has all the visual features of a vintage slot, we can see that some work has been done to bring it up to date with modern trends. Unlike classic slots, Zoom has 64 active pay lines, which go over 6 reels and 4 rows, an unusual design even for modern slot games.

The bet levels are normal, probably the only normal detail in this game, ranging from $0.10 to $100 per spin. Someone should have told the creator that bonus features are modern these days and a good feature attracts more players to try the game for real play.

But that info was obviously left out from the designer, so Zoom doesn’t have any classic bonus round available. Instead there is some alien like way for big payouts to land on the reels, by forming Massive and Super Massive symbols.

This way of forming winning combinations on the reels is apparently effective as players can win up to 800 x total bet in a single spin. 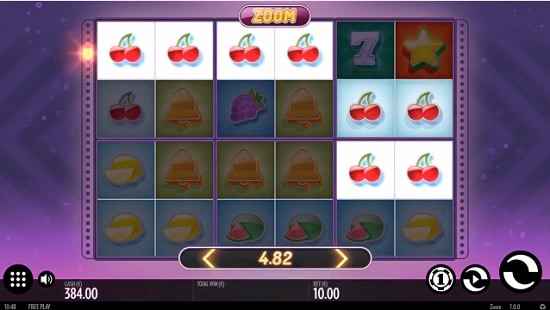 Generally speaking we can’t find too many details to love on this game. The off grid design and the fact that there is a totally opposite design for a bonus feature is interesting and refreshing compared to the standard offer out there.

We know that Thunderkick tends to keep to their standards of originality in every aspect of a game, but sometimes they get lost in their ideas. What we don’t like in this game is the fact that you need to play to get one big payout only and hope it will be enough to cover your losses or set you in plus for some amount.

This is too much of a risk, since base play wins are small, with very rare medium payouts. The pay table is too weak, even for the maximum 6 of a kind combination.

This depends whether you like the Thunderkick slots or not. In our opinion Zoom can be profitable, thanks to the Super Massive symbol, but if a big win doesn’t come to boost your bankroll fast, you can hit rock bottom very fast.