Thunderkick is one of the most original and innovative software providers in the industry when it comes to video slot games. After a very short break the company announced the release of a brand new video slot game which is set to go live on August 24th.

Each new slot release from this provider is anxiously anticipated by their loyal players, but for Babushkas a great promotion video was released, allowing us a clear insight of everything the game has to offer. This slot is designed as a low variance game with a maximum payout of only 390 x total bet.

The game design is simple, with the standard 17 fixed pay lines, 5 reels and 3 rows. As in most other Thunderkick slot games, the bet size on Babushkas will range from $0.10 to $100 per spin. The name and theme come from the Babushka dolls that originated from Russia, but can now be found in all corners of the Earth.

Their multilayer design with smaller and smaller dolls emerging with each removed layer is interesting to see and that is one of the main reasons why these dolls found their place on the latest Thunderkick slot release. The visual details in the game are on a decent level, with great animations and attractive symbol details.

Visually Babushkas is a video slot game that will catch your attention and tease your imagination at first sight. But once you start spinning the reels you will instantly be amused by the many bonus features that can be triggered in each spin.

Players can trigger several base play features, like the Symbols Upgrade and Wipe Win, which are made possible by the multi level design of the Babushka doll symbols. The symbols have 7 levels in total, from 0 to 6, and the highest paying dolls are the ones on the lowest level.

If a win with a least 3 matching symbols is formed on the reels, the symbol involved will strip down for one level, if that helps in creating bigger wins in the following strip. This can continue until no more better wins can be formed or until all symbols on the reel are stripped to the last lowest level, awarding a Wipe Win payout of 100x total bet.

But Thunderkick has more juicy surprises hidden up their sleeve, beginning to unfold when the Wild Bear lands on the central reel. 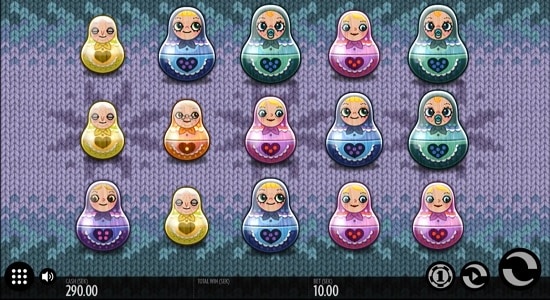 We love the visual appearance of Babushkas and the base play features, but our top pick is the Wild Bear Mystery feature. We love the fact that the Wild Bear can award a Scare or Charm feature, striping the dolls for 1, 2 or 3 levels.

The only detail that isn’t attractive in Babushkas is the low symbols payout and the maximum payout potential of 390 x total bet.

Babushkas is a very fun game to play, because of the many different features that can be triggered in each spin and the extra features that are awarded by the Wild Bear symbol.

The payouts may be small, but even with a 390 x total bet maximum payout, Babushkas is still capable of giving a decent boost to your bankroll.