Mythical and mysterious, the Huangdi slot is certainly original

With countless other Chinese themed slots out the net, one would imagine that Microgaming would struggle to come up with something original and exciting in this themed slot genre.

They have pulled off the task rather majestically. The legendary Microgaming have come up with a real treat in their Huangdi: The Yellow Emperor slot. How does taking on the myth of the legendary first emperor of China sound?

Huangdi: The Yellow Emperor features a total of 5 reels and just 25 paylines, so it’s perhaps not as expansive as you might like from a Microgaming title. It does contain a non-progressive jackpot worth 1,000x your total bet, though, so that’s a plus.

Huangdi: The Yellow Emperor is not being pegged as the next big Microgaming developed title. Instead, it is being thought of as one of their smaller-scale releases. We would imagine that this slot will get the go-ahead for a launch before most of the other bigger upcoming Microgaming slots, so expect it any week now.

The theme of this slot is what really sells this game. Well, that and its special features. The theme is that of the first mythical emperor of China, Huangdi. 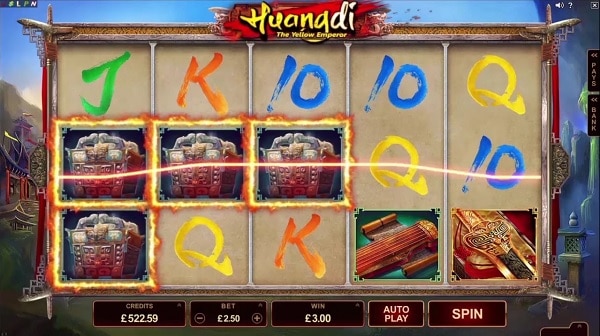 The legends claim he was the ancestor of all modern Chinese, but that’s certainly not easy to verify. The chance to play a game which is based on the equivalent of China’s King Arthur is certainly exciting.

The special features are also creative and original. There is a stacked and expanding symbol feature. This can see three very special icons appear stacked on the first reel.

When they do so whilst the wild appears stacked on the fifth reel, all similar icons on the reels will also become expanding symbols. This can lead to massive wins.

Even though the slot has an original theme, some of the graphics are a little yesteryear. Moreover, the wagering range is positively archaic. Players cannot alter any of the 25 lines which feature in this video slot. The wagering range stems from $0.25 per spin up to $125 per spin.

We’d have liked a little bit more control over those wagers, and perhaps a few more paylines to play with in this game. That would perhaps have made the stacked symbol bonus a tad more rewarding, though.

There’s certainly no reason to shy away from this slot. There have been hundreds of Chinese themed slots released over the last decade, and let’s face it, most of them have been garbage. This is one that really excels.

It is original, it is creative, and it offers us something new that we haven’t seen before from this genre of slots. The Huangdi: The Yellow Emperor slot also lures you into the myth, and makes you want to learn more about the man. Few other slots can replicate that kind of interest in a figure.