Michael Jackson King of Pop is the latest online video slot game coming from Bally Technologies. It is designed as a 25 pay line, 5 reel slot with bet levels ranging from the minimum $0.40 up to $80 per spin. An important detail about the total bet level is that the 15 cents are meant to activate the full set of bonus features which in return can produce bigger payouts in the bonus rounds.

As the name suggests this video slot game for a theme has the life and work of pop legend Michael Jackson. This great man is one of the biggest music legends that ever walked the earth, not just by his music, but also by his humanitarian work.

The slot is designed perfectly, with many great animations and the background music consists of some of his greatest hit songs. This way you can enjoy his music as you spin the reels so you won’t get bored after playing for a long time. The designers of this game paid great attention to the bonus features and made sure they would be entertaining to the regular player.

There are two random bonus features which you can trigger during base play and each one awards extra wild symbols on the reels. The Moonwalk Wild feature can award from 2 to 6 extra wilds on reels 2, 3, 4 and 5 while the Stacked Wilds feature can award two full wild reels.

The main bonus feature in the game is triggered by landing 3 bonus symbols on the 3 central reels. Here you can win cash prizes or one of the two available free spins features. The first is called Beat It Free Games and it awards 10 free spins with a sticky wilds feature.

Each wild that lands on the reels remains in place until the free spins are over. The second feature is called Smooth Criminal Free Games and here you get 5 free spins, each played with 1 or 2 full wild reels. There is also a jackpot prize of 2,500 coins, which is awarded by landing 5 jackpot symbols on a winning pay line. 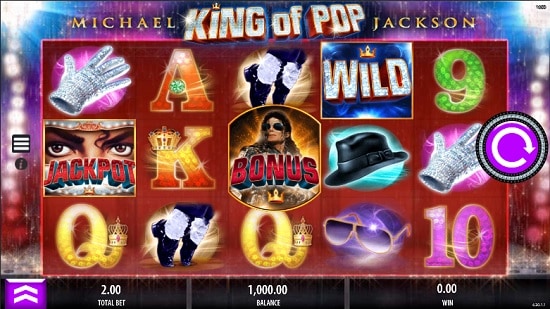 Michael was a great man and a great artist so we definitely love the game theme. Visually the slot looks great and doesn’t get boring after long  sessions.

We also love the fact that there are many bonus features which make this slot interesting to play. Overall we like everything about Michael Jackson King of Pop.

Nothing. The game is perfect the way it is and we can only congratulate the designers for their great work.

If you are a fan of Michael Jackson this game will easily become your favorite. The winnings during base play are small to medium, but you can get some wins over 100 x bet in one of the random features. The bonus round is great and we love the fact that you can win one from the several different features.

Both free spins features can pay great if you are lucky to get some nice high paying symbols in combination with the big number of extra wilds. This is a great slot game and we can only recommend that you try it out for real play.