The Steampunk genre is getting quite a boost from Microgaming this year, as the company offers several new games which are inspired by it. Besides slots like Fortunium Gold, they now have Noble Sky as well.

With flying airships being the source of inspiration, this particular game looks great and has some of the more impressive symbols I’ve seen from them, especially if we’re talking about its Airship wilds. Regular wilds are present as well, along with several main characters (male captain and two women), top hats, a compass and the standard Royals (9 to A).

It’s Microgaming that is offering the game on their platform, but an independent studio called Neon Valley Studios designed it for them. Either way, it’s one of the interesting new slots that we’ve seen this year from Microgaming, and there is still enough time left in 2020 to get plenty more. 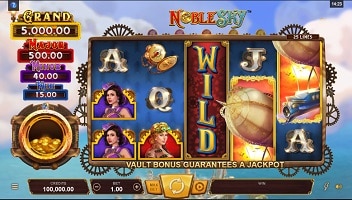 A bet that you’re placing on Noble Sky’s spins requires that you invest at least $0.25 in the outcome of each round. As you increase the bet, you keep the number of lines steady at 25, but their line bet gets a boost. This allows for bets of up to $50 ultimately.

It’s a slot which offers 5×3 reels and 25 lines, one of the more common layouts that such games will have. Combinations are formed when 3+ symbols of the same type (wilds may assist as well) appear on a line, left to right.

Among the game’s features, the wilds are going to be especially easy to spot and take advantage of. Two versions of these wilds exist, and they may only appear on the last four reels, denying them the ability to create combinations of their own.

First, the regular wild, which you can get stacked, and quite helpful in forming new wins of all types.

Second, there is the Airship Wild as well, which you’re looking to both use as a substitute, and get to take over an entire reel. When that happens, it becomes a walking wild, and respins follow until it manages to leave the game area. It will move towards the left side, one reel at a time.

The respins have multipliers attached, going up as you advance and go through more rounds. By the time you get to the 5th one, a 10x multiplier can be applied to wins (1x to 5x for the previous four respins).

The gold coins which will sometimes show up as part of regular symbols, are to be collected in a special vault. The more you get, the better the odds of reaching the Vault Bonus Game.

This one’s a picking feature, with 12 options/coins shown on the screen. As you pick from them, you try to get three that match, and this can end up bringing cash prizes of up to 5,000x the stake.

There are two different ways, in which you can go for a 5,000x jackpot. One is through the Bonus Vault, and its Grand Jackpot. The other is when you fill the reels with top symbols (25 combinations of 20x the stake each), during respins which boost wins by up to 10x.

Despite the game’s high potential, the volatility is only a Low-Medium, while the RTP is 96.12%.

Noble Sky, even though it’s a game that tends to pay often enough, it manages to also have a very high top payout. As unlikely as that top jackpot might be to trigger, it’s great that you at least have an interesting target to set your sights on.