Ancient Egypt and slots go hand in hand like bread and butter. While we’ve seen many themes come and go over the years, few proved as long lived as pyramids and pharaohs. And just when it seems like software providers have forgotten about it, a new game proves us wrong! This time around, it’s Microgaming and Stormcraft Studios that have the task of bringing the desert back to life.

We’d like to claim that they’ve succeeded, but the Sahara just looks as barren and lifeless as always. You can slightly improve the situation by activating the Win Booster, but that doesn’t fix the core problem. The animations look really smooth, and the developer should definitely be praised for improvement there. But the background image and symbol design are both lacking.

Available special features include the win booster, Rolling Reels, the multiplier trail, free spins and the second chance re-spin. Great variety of bonuses that all play together quite nicely.

Microgaming has been instrumental in shaping the online iGaming industry as we know it. They’ve played a role in creating online casino software as early as 1994! They also realized the potential of mobile, making casino software for phones as early as 2004. Nowadays, the software provider has taken a more mentoring approach. Rather than make slots themselves, they’ve partnered with several smaller developers to create a whole host of fun new games!

Specifically for Jungle Jim and the Lost Sphinx, it was made in collaboration with Stormcraft Studios. If the name sounds familiar, it’s because they also made fun slots like Fortunium and Dragon Shard. They don’t have much of a presence, outside of their Microgaming partnership. 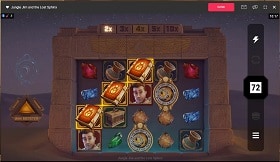 This game is played on a 5×4 board with 35 paylines. As you score several consecutive wins using the Rolling Reels bonus, the playing field increases in size to a 5×5 board with 50 paylines. This lasts until you stop winning, at which point the reels reset back to their original size.

The user interface is clearly designed for mobile play first and foremost. It’s laid out horizontally on the right side of the screen, displaying only icons. Still, it remains quite functional and easy to use, regardless of what device you’re playing on. Changing the values of coin size and coins per line allows players to bet between $0.10 and $80 per spin.

Stormcraft Studios also improved on the traditional Microgaming flaw of having weak Autoplay settings. Now, you can set your total number of spins, how much you’ll wager and a win and loss limit all from the same menu! We’ve seen better, but this is a drastic improvement compared to what we were used to.

As far as visuals go, Jungle Jim and the Lost Sphinx failed to win us over. The animations are cool, and the setting itself is an old favourite. But there just isn’t enough to sate our imagination. The symbols look incredibly basic and small. This could have been solved if the reels were further zoomed in. The background image isn’t bad, but it’s just a desert. Nothing captivating about it.

The Win Booster is the first bonus you’ll probably notice. It acts as an extra Scatter, which means it’s easier to trigger free spins. But having it active means you have to pay four times your usual wager, so keep that in mind.

Thanks to Rolling Reels, the thrill of winning doesn’t have to stop with one winning combination. After you win a prize, the icons which were part of it blow up. Existing symbols then fall in their place, while brand new icons fall from the top to fill in any empty spaces.

Consecutive wins are further rewarded by the multiplier trail. Each roll increases your multiplier. At 4x multiplier, the reels expand to a 5×5 board, with 50 paylines. During free spins, the multipliers are much stronger, capping at 20x instead of 10x.

If you don’t get a win on a third roll, you get a second chance re-spin. This allows you to try again and score that reel expansion you might have otherwise missed.

Last, but not least, are the free spins. Three or more Scatters will earn you twelve extra turns. During free spins, the reel starts fully expanded. Any extra Sphinx you collect adds one more extra turn, and causes the multiplier trail to start one level higher.

This high volatility slot has a jackpot worth 6250x your total stake. The game’s RTP ranges between 96.1% and 96.3%, which is above the current industry average.

We had higher expectations of Jungle Jim and the Lost Sphinx. The gameplay is pretty good. The special features all mesh together wonderfully. When everything clicks, and you score that massive prize, it’s an amazing experience! It’s just a shame that the visuals weren’t awesome enough to match. We’d still recommend playing it, though not as enthusiastically as we’d like to.